Kartik Aaryan is an Indian actor who mainly works in the Hindi film industry. After struggling for three years, He made his Bollywood debut with 2011 film Pyaar Ka Punchnama , a buddy film about the romantic tribulations faced by three young men, which was directed by Luv Ranjan and co-starred Nushrat Bharucha.

Following a brief setback, Aaryan subsequently collaborated with Ranjan and Bharucha in two more buddy films, Pyaar Ka Punchnama 2 (2015) and Sonu Ke Titu Ki Sweety (2018), both of which were commercially successful but received criticism for their misogynistic themes. The latter proved to be a breakthrough for Aaryan, and he followed it by starring in the 2019 romantic comedies Luka Chuppi and Pati Patni Aur Woh. 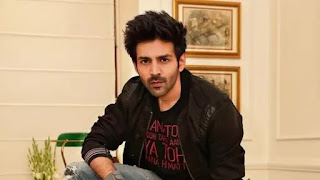